I'm already dreading writing this post. As I was looking through my posts, I was hoping that I had already written this. No such luck. There is this indescribable pain and peace that I have writing this. I would give anything to have our circumstances be different. To have a baby that was still inside me, or even fighting with an excellent prognosis in the NICU. But that isn't our story.

As usual I woke up and went right in to see Freddie. When I went in, they were doing his head ultrasound. I didn't want to see the images right then because I knew we would be pulled into an office later that day. I stood back until they finished and then went to do the usual - sit next to Freddie until shift change. 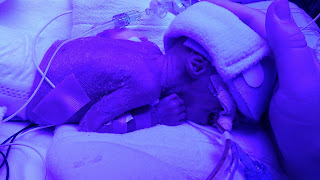 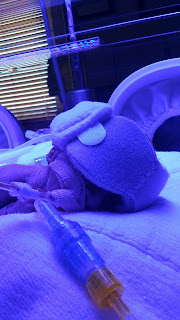 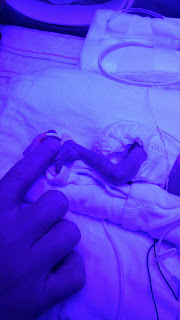 The nurses in the NICU did 3 days on - so we'd had only a handful of nurses because they would typically finish their scheduled days with the same baby. That morning he had a new nurse, she was someone around my mom's age. She kindly introduced herself, updated me on my baby's night, and then stood aside to let me have some time with my baby. I told him good morning, talked to him about the dreams he'd had, and just held his hand. 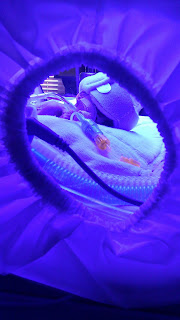 While the nurses were swapping, I went back to eat the breakfast my older sister had picked up on her walk to the hospital from the hotel and I got "ready" for the day. Getting ready for me meant - get in the shower, sob my guts out while in the shower (hoping the sobs were muffled), get dressed in something that wasn't maternity or if it was didn't look it, do my hair, and put on waterproof mascara. Voila. There is your how-to guide to looking haggard yet beautiful(ly destroyed).

As soon as I was finished getting ready, I was in with Freddie. I wasn't leaving, so my family took turns rotating through. While I was sitting next Freddie, the head nurse for the NICU came up to tell me that our doctor and the team of specialists was planning on reviewing Freddie's scans and then talking to us at 1:30. My heart sank. Everything changed to a count down to 1:30. We knew things weren't going to be better. Or at least not in a way that would save our son from a lifetime of struggle. Yet at the same time we hoped. Hoped that literally by a grand miracle the bleeding would be gone. The damage reversed. That all our little boy had to do was get bigger and stronger and then we would take home a healthy baby boy who beat the odds and was an inspiration to all. 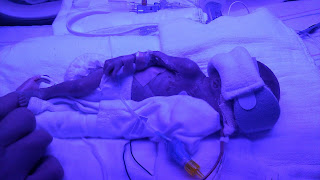 This is where the details of the day begin to get foggy.

I can't remember the exact order of things that morning - only that it felt like days.

Fred had been at school all morning, attempting to clear his head to finish his finals to graduate the following week. He was able to finally get back to the hospital around 11:00. We had been kicked out of the NICU because Freddie was getting a new bed. His current bed had a broken door (where you stick you arm through) the door had fallen off and in its place was a piece of plastic keeping the humidity and temperature up. it broke on his 1st night there but because he was so critical they couldn't move him until Tuesday. Again a tiny victory that made you think hope wasn't lost. While they moved him we had to leave so Fred was forced to just sit. and wait. He could hardly stand it. All he wanted to do was be in there with his son. Finally we got the call saying we could come back in. Fred and I went in and only a little while later we were kicked out again for another procedure on another baby. This time it would be a little while longer so Freddie's nurse made Fred promise to make me eat. We went down to the cafeteria where Fred ate and I picked at his food. My parents and sisters who had been roaming the halls restlessly (my mom literally cannot sit still) came to find us. We updated them on Freddie's new bed and that the doctors would be pulling us in at 1:30. 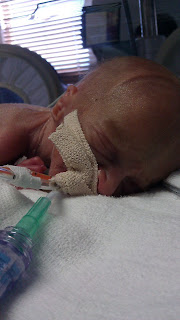 After the alloted time, we went back upstairs and back inside with Freddie. soon after we were kicked out again. I'm not sure on the timing of everything but while we were kicked out we went back into our room where we cuddled on the bed trying to get 30 seconds of rest in our restless week. As we both fell asleep, someone knocked on the door. I sat up and our social worker walked in. Instead of seeing that we were obviously trying to rest in the spare moment that we had, she flipped on the light and came to sit down at the chair at the end of the bed.

I haven't blogged much about our social worker - she was incredibly cold. She seemed to try and force a tiny bit of compassion but it just came out as "yeah yeah your baby is early and there is no hope". She had had the nerve to talk to me corner me on Friday in the NICU about my "options" (this is the day after we learned our baby wasn't going to make it...the last thing I wanted to talk were those options) and made the point of telling me that she was leaving soon for the weekend so she wanted to tell me before she clocked out. Honestly, I don't think she expected to see us Monday. Then on Monday morning, she stopped by Freddie's bed where Fred and I were both in tears. She had gone to the opposite side of his bed and simply said, "Mind telling me how the weekend went?" in a cold, accusing voice.

As she sat at the end of the bed, she talked to us about our options again. About what we could do to make our last moments special. There was actually a glimmer of sympathy in her eyes. We talked about how we most definitely wanted a photographer there to capture us holding him for the first time and how I wanted hand imprints if I could get them. As she was telling us about the imprint kit they had, my sister Sydney came in to grab her purse. She walked in and as she was leaning over to grab her purse off a chair, Marilyn said, "should we continue this in private?" Sydney quickly said, "I'm just grabbing something. I'm not staying". So she left. Moments later, my parents came in and sat down (they knew how much we disliked our social worker). Marilyn repeated that same question. I was so annoyed. We were talking about imprints. Nothing crazy personal. Fred just said, we're all family. It doesn't matter. She talked to us more about the imprints and said she would get us one to look at.

She left to go grab the imprints and a few other things and we told my parents the other things she had talked to us about. We then looked at the clock. It was about 1:10. We decided that we needed to go in to see Freddie before the doctors pulled us aside. So off we went. As we were walking down the hall, Marilyn was walking back up with the imprints. We told her that we were going to go see Freddie and would look at the imprints later.

Ooooh, I get frustrated every time you talk about your experience with the social worker. I am glad your family was there to build you up every time you felt torn down. Chana, your story continues to inspire me. You are amazing. Love you guys and am always thinking of you.

I'm sorry that your social worker was so insensitive to your situation. Thanks for sharing these rough moments.