The next morning - I was wide awake at 6:00 AM and in next to Freddie (PJs, unbrushed teeth, crazy hair and all). I stayed in there until the shift change and then force myself into the shower to be semi presentable. The mood was still the same. There was pity and sadness in everyone's eyes yet hardly anyone would look me in the eyes. I guess I couldn't blame them - I was a wreck. I would pull it together just in time to start sobbing and crying again. Our nurses learned to have a box of tissue on each side of Freddie's bed because I needed them. The other parents of the other babies in his area barely looked at me - again, I couldn't blame them and I wouldn't have wanted to talk to them anyway. 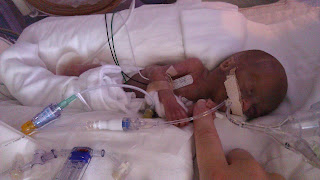 Fred on the other hand was exhausted. Every day the emotional and mental strain had him ready to sleep for days.
We were so lucky to have our families surrounding us. Our parents took care of things we couldn't, got us food when we didn't know it'd been hours since we'd eaten, and hugged us, listened to us, and cried with us. It made such a huge difference to have both of our families there.

Friday was just an all around bad day. Nothing monumental happened with Freddie but it was the knowledge of what we knew that kept us in tears. 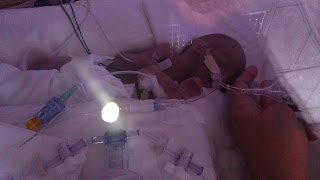 We had been told about the organization Now I Lay Me Down To Sleep, a group of photographers that comes in and takes pictures for parents of a terminal baby at no cost. We had decided we wanted pictures but weren't ready to actually schedule something. If we scheduled something it meant that we had made up our mind and that the end was near. My mom and my sister had gone behind my back and contacted a local photographer that I loved and though she wasn't part of the group, she had volunteered to come do it. My mom had scheduled her to come that night. When she told me this I broke down (in the NICU mind you) - told her I couldn't do it and that we wouldn't do it that night. Thankfullly she was okay with us cancelling last minute.

We battled with the decision and tried to figure out if it was selfish to keep him and hope - because after all everyone was praying for him and aren't prayers answered? My mom reminded me - not all the prayers were to help him heal, but to do God's will and help us be strong.

What if our child was meant to be an example to others in this life while in that state? If we chose the wrong thing - was it because we couldn't handle it? Not because he couldn't?

Friday afternoon, a neurologist came to talk to us to offer a second opinion. Fred had left to go check on school things at the hotel so Fred's mom and sister sat with me as the doctors talked more about outcomes.

When they left, I felt strangely comforted. As though things weren't as bad as they seemed. The neurologist had said that based solely on his brain injury, he would at the very least be completely paralyzed on the left side of his body and would most likely suffer from stiffening (when your arms curl back into your body). He said they couldn't be positive of the mental damage and that he wouldn't walk but that there was a chance (however small it might be) that the left side of his brain would take on the role of speech and he might be able to talk. They said they were having a neuro surgeon look at his scans as well to look for hydrosphylis which causes cerebral palsy. This was all I heard. At the end of the conversation there was that awkward pause again. The one that indicated that a question had been asked and that I needed to provide an answer - but once again I didn't know what was being asked or said. I couldn't give an answer. 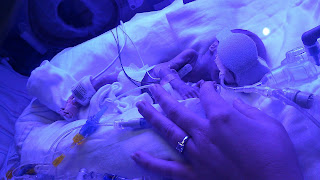 When they left, my MIL and SIL looked at me with sad eyes. I told them how I felt like things weren't as bad and that maybe we should go for that tiny glimmer of hope. Both my MIL and SIL shook their heads - unlike me they were able to stay focused and listen to what the doctors were actually saying. What they were actually saying was "this is really bad - your little boy's body is failing and it doesn't look like he's going to make it. If by some miracle your baby does make it - he will be severely handicapped."

oh. that's what they said?

Luckily my MIL was in there because she was able to grasp the question that was being asked. They wanted to know whether or not we wanted them to do everything in their power to save him if things started to crash. They had told us previously that doing chest compressions on him would do more damage than good - so I knew that was something that we didn't want them to do. My biggest concern was that he was to be in no pain or discomfort.

That night, Fred made me leave the hospital to go to dinner with his family. We went somewhere within five miles of the hospital. The minute we sat at our table - I began to have anxiety. My whole body began to sweat, I couldn't stop moving for fear of having a full blown panic attack. What if something happened while we were gone? I wasn't going to eat though I'd ordered something so at one point I thought 'I can't stay here. I'm going to get a taxi or run back to the hospital if I have to'. It was the longest 45 minutes of my life.

I pretty much ran back into the NICU when we got back to the hospital - and then couldn't leave Freddie's side for hours.

We decided that night that we wanted anyone and everyone to meet our little man. Everyone deserved the chance to meet a perfect child and to feel of his presence and God's love. I think if we could have we would have taken him on tour - he was that amazing.


A little video of freddie's toes. Ignore the sobs.
That night, at 11:30 we were back in our parent room (beginning to feel like permanent residents). I was writing in Freddie's journal, Fred was watching tv. There was a knock on the door and there was the neuro surgeon. He and our nurse came in and he preceded to tell us that he'd looked at Freddie's scans and that there weren't any signs of swelling yet but that most likely there would be. He told us all about "chances" and that at the very least Freddie would have developmental issues. What does that mean? He'll read at a 3rd grade level in the 6th grade? Because we can handle that.


Once again, my mind began to wander. I didn't hear anything he was saying. I began thinking things like: why is he wearing a surgical cap? Did he just come from surgery? Why is he here so late? Oh he isn't wearing a ring. Maybe I could set him up with someone?

After he left, Fred looked at me and said, "if I hear the word chance one more time I think I'll punch someone." It was true. After the first meeting with our doctor who had been harsh but realistic, all we had heard from other doctors was that there was a chance for this or a chance for that. We both had wanted to scream.  At what cost do we hold out hoping that one of the chances worked out? How long do we put our baby through this just hoping he survives?

We went back in to sit next to Freddie for the next couple hours. Sleep meant nothing to me - it was merely something the nurses and my family told me I needed to have. But what did it matter? Soon I wouldn't be able to sit next to my baby at all.
Posted by Unknown

I keep on thinking about you everyday. You are so strong. A friend once told me that God doesnt give us more that we can handle. If he did put you guys through this, it is because you will make it through. Sending you positive energies.

I think about you all of the time! Little Freddie is a perfect little angel. You can tell by the video how comforted he is that you were there with him as you played with his sweet little toes!! You are an amazing mother and Child of God to be chosen for such a choice spirit. Your family continues to be in our prayers!

Such a precious video of little Freddie's toes! Chana, I appreciate so much your words and sharing your feelings so freely. You are amazing!

Thinking of you and sending prayers for all.

I love the video of his little piggers. So sweet. Thanks for posting that-- Loves--

Chana, you are an amazing person, and I consider myself lucky to know you. I can't even begin to comprehend the strength you have in you. You're little Freddie was so blessed to have met, been comforted, and loved, by his wonderful parents. Thanks for the video. It was so incredibly sweet. You are in my thoughts constantly. Love you.