Sunday:
This was the first day where just the two of us had the opportunity to just sit with Freddie as long as possible. Fred's family had left, my parents were at church 40 minutes away so we just sat as our little family in the NICU. 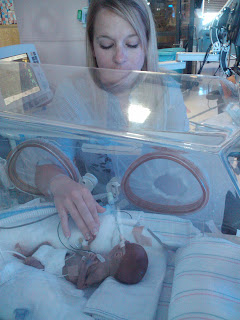 As we sat there in the morning, we noticed that Freddie's neck looked...thicker. I noticed it but thought that maybe it was just the position that they had him in that made him look that way. A little while later, the nurse asked if we thought his neck looked thicker. His neck was swelling up which made his tiny chin disappear and made him look like he had a "gobbler". His neck was literally almost the width of his tiny shoulders. They did an x-ray and discovered that his PICC line was going up into his neck blocking the drainage of any fluid from his neck or head.
They had to go in and pull the PICC line out a little to see if it would make the swelling go down. After they pulled it out a little they would look to see if he had any other viable veins to put in another PICC line. The doctor on duty that day told us that if the swelling didn't go down and they couldn't find another vein that potentially this could be the beginning of the end. He was at great risks for blood clots and the only way for them to get blood clots out of the neck was to give blood thinners - but because he was on such high dosages of blood pressure meds he wasn't a candidate for that.
Unfortunately, the nurse blew the one vein he had left so a new PICC line wasn't going to work. Luckily though the swelling went down pretty rapidly.
Monday:
Fred took a much needed afternoon away from the hospital. He had to finish up some school stuff so after he left I barely left Freddie's side. literally. I was exhausted and I couldn't sit at his incubator without touching him somehow - usually with my hand cradling the top of his little head. Poor Freddie. He was probably so sick of me. Plus his little incubator was hot with ample humidity - so he was stuck with his mom's sweaty hand on his head, chest, foot, or trying to hold his hand all day. 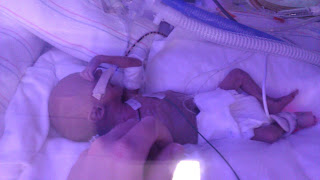 I sat there as the parents of the other babies in the pod came and went, I rested my head against his incubator and told him it was okay if he needed to go. That we loved him so much and were so proud of his fight but that we knew the plan and he shouldn't hold on if it was his time.

Monday evening as I sat next to Freddie, the group of doctors came around doing rounds. I hated when they did this. It was awful - like being on an episode of scrubs or greys anatomy. Yes please sit and talk about our baby's grim future as though his sobbing, emotional, and human mother isn't sitting right there. No, please. When they came around was my time to take a break so I wouldn't have to hear it.

After the group of greenies left, the director of the unit and the doctor on duty that night approached me at Freddie's incubator. They began asking me questions on our decisions, feelings, impressions from the other specialists, etc. I told them what the other doctors had told us but that we weren't ready to make or vocalize a decision yet. The doctor on duty then said something that really made me realize that we really were on borrowed time and that Freddie was hanging on because WE wanted him there. 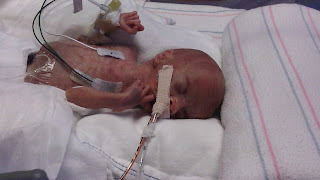 She told me that while they didn't want to pressure me and that they would continue giving him the best care possible - that we only had a window of time to make this decision. He had graduated from one ventilator to another and that while he still required a lot of support, if he kept progressing with his breathing and lung abilities (which could happen within a week) he could be taken off the ventilator. Once he was off the ventilator, the decision was no longer ours. Once he was breathing on his own - we had made our choice and that was the life we'd chosen to give him.

I started sobbing. This was the first time anyone had mentioned that time was running out. We knew that wasn't the life he was to live. We had received confirmation that his time on Earth was to be short but we also didn't have the power to say goodbye yet. Every day we were with him made it harder and harder to make that decision. We were so in love with this baby and of course we didn't want to say goodbye. In our heart of hearts we were still hoping for a miracle.

Fred got back and came in to sit next to Freddie to make up for all the lost time that day.

My parents had been there all day but decided to get out and go "get grapes" (my mom is bad at lying). When they came back, my two sisters were with them. My sisters had flown in from Utah to meet Freddie. They would be there for the night and then leave in the morning. As the night progressed and I told everyone about the conversation I had with the drs. We knew we would ultimately be making some big, hard decisions the next day. Because of this, my sisters changed their flights to leave Tuesday night instead.

That night we took turns in next to Freddie, snuck away to dinner, and skyped with my brothers and their families so they could meet our little man too. (sidenote: how cool was it that we were able to skype with Fred's fam and mine so that they could meet our babe? answer: extra cool) 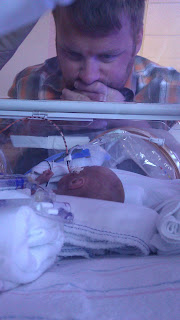 Fred had to take a few finals the next morning, so he went home to our house to sleep. I had pretty much decided that if Fred wasn't there, I wasn't sure I could sleep so  I would probably just sit in next to Freddie all night. Which was fine by me - I was invincible. I didn't need sleep and I definitely didn't need to eat. Instead of leaving me alone, my little sister opted to spend the night with me while my older sister took the hotel room. We stayed with Freddie until about 2:00 AM and then went to get some shut eye.

postscript: I feel like there is so much I'm leaving out. I hate it. I hate not being able to capture every moment through this blog to remember what it felt like. These posts are getting shorter - which I'm sure some are glad for - but for me it means I'm leaving things out. Which breaks my heart and brings tears.
Posted by Unknown

You are doing a fantastic job sharing with us, dont you put any pressure on yourself.

You are doing a beautiful job at telling your story. It would be hard to fit in every detail of it all. I don't know if I just hadn't noticed or if that was the first photo of Fred and Freddie alone together. I love it. You can see how much he loves him. How much you both do. Really, a beautiful thing.

Chana don't you feel that way at all you are doing a great job. Thank you for letting all of us hear and know what went on. Freddie is such a cute little guy. I have just been crying since I read this post. (and all the other) Love ya!

Chana- you are doing an amazing job telling Freddie's story. I am glad you are posting and would sit and read it all everyday. I feel such a strong spirit when I read about Freddie. I bet it's hard to write it all, but I am so glad you are writing about it, even the little details. Thanks for sharing your beautiful baby with us.

Chana...I am friends with Sydney. Your story is both inspiring and heart breaking. I think you are telling baby Freddie's story beautifully. Just remember that you can always write another post and other memories as you remember them. There are no rules or limitations when telling your own life story. I think you are incredibly strong and courageous. You gave birth to a beautiful baby that has touched my life in many ways. I wish I had words of encouragement to help you get through this difficult time. I do know that all things happen for a specific reason. I pray that you will find peace and comfort as you continue your journey as Freddie's mom. You and your husband are both pretty incredible to have been chosen to give Freddie the time he had here on this earth. Never forget that.

Chana,
What a precious angel baby. You and Fred truely are amazingly strong people. We love you guys.

Chana,
I echo everyone else by saying you are doing a beautiful job at writing about your precious time spent with Freddie. Anyone who reads your entries can feel of your love for Freddie and your gratitude to our Heavenly Father for the time you spent with him in this life. I am sure others will agree with me when I say that I hang on to every sentence and the emotion that is conveys. I feel so inspired by you as a loving, nurturing and faithful Mom! I love reading about Freddie & all the little details, he is one amazing and special tiny boy. I am thankful for your strength and kindness to share your life with me and all those who read your blog. We too shed tears for you!

Chana, I have been reading Freddie's story this whole last month. I always cry, I always smile because I can feel your family's love, and I always want to post a comment but never can find the right words...this little boy is so special. and you are such a special Mom.

Hi Chana,
This is Katie, tadd's sister. First and foremost you have the most amazing baby boy and you are a wonderful mother. What a lucky little man he was to have parents like you and Fred. My heart goes out to you, Fred, and your family. You are always in my thoughts. Honestly, your story is so beautiful and descriptive. You have such wonderful accounts and pictures to go along with it. Thank you for sharing your story.

Chana,
Wow, it's been a long time. I came across your blog on accident actually. I am so glad I did. You're story has been so inspirational and really life changing. Thank you for posting your little Freddie's story. You are an amazing mother, and I know he is missing you, too. What an amazing little spirit. My prayers are with you and your husband. I've always been so impressed with you, and my heart aches for you at this time. I hope peace, comfort and happiness come quickly to you and your family.
Jennifer Mosher Dockendorf