An Afternoon of Golf...

Today Fred went golfing at the course behind our complex. While on the second hole, he noticed some guy up wandering around the fourth tee box. Soon after he was passed by the head pro and a cart dude - who drove toward the guy.
Fred completed the second hole and headed toward the next tee box. As he approached the pro and cart dude who were now talking to the man he noticed that the guy was clearly on something. He kept running at the pro but then laughing right as he got into the pro's face. As Fred passed the guy started toward him. Fred slowed down thinking 'sure - let's go' however the pro quickly waved him on.
As Fred got to the next tee box, he sat and watched as a cop got there. When the cop approached, the guy sat on a bench with his hands behind his back. When the cop got behind him and reached for his handcuffs, the guy stood up and started throwing punches. This is when Fred got involved.
Fred ran over and started helping try to gain control of this guy. The cop tazed him - nothing happened. It came down to the cop and Fred having to throw punches and basically beat the guy up to get him to the ground for the cop to gain control. Because the pro and cart dude weren't as big - Fred ended up being the one to help the cop the most.

Fred was the only one that could hold him down when the cop finally was able to get cuffs on him. After they finally got the guy up and taken into custody, the cop came back over and thanked Fred for his help because he wouldn't have been able to gain control without it.
We went back over after I got done with work and here's a picture of the after math
(it is a little gross - beware - and yes...that's blood - from punches not head slams) 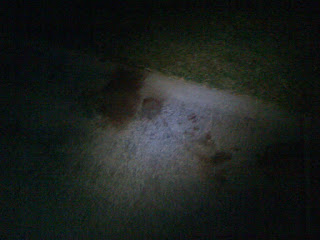 I'm so glad that Fred was able to help so that no one else got hurt! 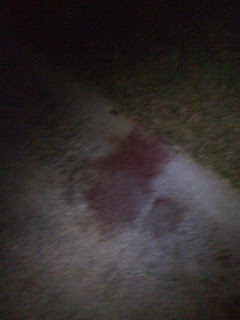 That sounds like a Joseph story....He can find a fight anywhere even a golf course!!

Wow. Scary. Welcome to Phoenix. :) YOu must feel safe having Fred around.

Crazy story. Fun for Fred to have a legal cop approved fight, bet he loved that! Freaky though.