So we got rid of DirectTV for awhile because well...we love us some tv. Has much changed? nope. Netflix consumes our lives.

Fred is king of the remote because shows like Veronica Mars, the OC, and anything with Reese Witherspoon are below his standards of tv.

After the last few days I'm about to revoke that crown though. The last two nights he has picked the worst movies (his history in picking movies was somewhat flawed before this as well - underworld anyone? I'd prefer to be beaten).

What were they?
**warning - I may offend some of you bad movie lovers. Fred said if I mentioned these movies online I would be risking a beat down from strangers for insulting some of the best movies of all time. I told him I would take the chance. But please have mercy on my soul - I'm already praying for yours.


A River Runs Through It Time Bandits
are you kidding me?

1. A River Runs Through it made me hope for the death of all the characters - it was the slowest, most painstaking movie of my life. Yeah sure Brad Pitt is in it and he's the only reason you keep watching (cough-in hopes he looses a shirt at some point maybe - spoiler: he doesn't)Then it ends with an old guy all by himself talking about being alone - awesome, let's get this girl bawling partly because I don't do well with death of older people but because I wasted hours of my life watching that stupid movie.

2. Time Bandits? Fred insisted it was a good movie - I should have left the room after the first 5 minutes. But I stayed and watched for at least an hour before I decided I would rather go to bed at 9:30 than watch the rest of this old-school movie. No, I have nothing against old school but I do have something against a floating head and horrible acting from little people. The only upside in this movie - Sean Connery. Sorry Fred - this movie was not funny. You didn't even laugh.

I think I should get some revenge and make him sit through some of my old favorites that I know he would hate.


Up first would be Crossroads 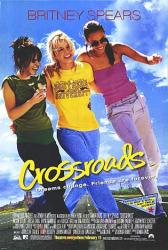 What do you think?
Posted by Unknown

I have sat through many bad boy movies. I'm surprised that he didn't select Labyrinth with david bowie. Yes it is really bad muppets and all it was by Jim Henson. does that tell you something.

Joseph is obsessed with Westerns! One every now and then...I guess I can muster. But every time we sit down to watch a movie they are top on his list! Kill me now! I know the pain. After crossroads, maybe you could bust out a little "From Justin to Kelly"...just to set the mood :) Ha ha.

Awww Crossroads!! Brings back a ton of memories! Remember going to the theater to watch that, what was it twice? HAHA that's funny! Good Times!