Tuesday
When we got to St. Joseph's, we found our little boy and didn't leave his side. The mood around Freddie was extremely positive. We kept hearing things like "it'll be a long, tough road but he'll make it - and so will you" and "Take pictures every day because when you take him home you'll be amazed at where this little man started".

We were overwhelmed and worried but felt nothing but optimism. 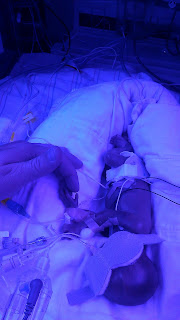 Freddie was extremely active when we were with him. He was punching and kicking non-stop - movements I recognized. Movements that I should have been feeling...not seeing. He had these huge feet and extra long skinny fingers.

The nurses were incredibly supportive. The staff took us into a parent room and told us it was ours for the night. We sat in there trying to gain some footing as to what the next four months of our lives would be like.

We sat on the bed in complete and utter exhaustion. We had someone from the March of Dimes come talk to us and left us with even more hope about how great our little man was and how we would fight this battle until we took home our baby boy.

At around 11pm, my parents walked through the door. We took them back to meet little Freddie, at about 1am it was decided that there was no way I was going to get any sleep in that room and it was best just to drive the 40 minutes home.

Wednesday
The next morning, we woke up tried to take care of a little business like making sure my work projects were handed off, that little Freddie was listed on our insurance, and that Fred was covered with school and work. Fred's mom called to say they were leaving soon and would be there the following afternoon.

We packed up some snacks, clothes, and journals to head right back out to the hospital. 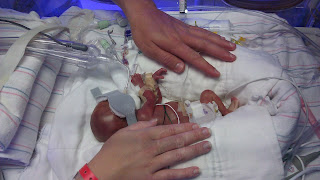 Freddie had had a rough night but we still felt like there was nothing to be worried about. He was critical but stable. He needed help to breathe but didn't need much oxygen. His blood pressure was really low so every time they took blood for tests they had to give him a transfusion (approx. 6 cc's) and he needed the assistance of 3 different blood pressure meds. He was being pumped with all sorts of medications that he looked pink, healthy, and plump. 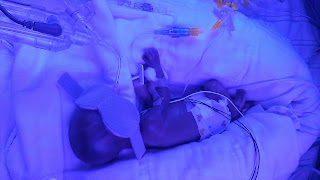 Because of his traumatic birth experience, he was extremely bruised and battered so he was under the billirubin lights to decrease his bruising.

We took all of this in stride because again, there was this optimism surrounding him from us, his doctors, and his nurses.

We met with a social worker as well. We were told that we may qualify for the Ronald McDonald House and be able to spend some time there instead of commuting the 40 minutes each way - every day. Our social worker was nice, but cold. She was very matter-of-fact, to the point, and lacked any degree of compassion. When we first met her, she approached us in a way that was like "well? what do you need me for?" to which our answer would have been "um. we have no idea. We've never done this before - what do we need to be doing?"

Her gold star moment was that she was able to get us a room at the extended stay hotel (directly behind the hospital) for a week from a private donor. After the week expired, she would see about renewing it or look into the Ronald McDonald House. We would have to spend the night at home again but then we would have the room starting the next day. This was a huge relief as driving back and forth to our house was going to get expensive and time consuming. Not to mention that if something went wrong during a time we weren't there, it would take us at least 40 minutes to get to the hospital.

We sat next to him pretty much the rest of the day - taking turns only to rotate the 2 allowed back there. We left the hospital only to eat dinner and then to finally head home at the end of the night.
Posted by Unknown

I still can not believe this all took place. What a whirlwind of emotions. It bothers me the social worker was so cold when you most needed support and understanding. Thank you for sharing your story. You do it with such grace.

It is so hard to only have two at a time back in the NICU. I totally understand why they do it, but sometimes you wish you could be back there with your parents and your husband all at the same time.

Chana I have not stopped thinking about you. That also bothers me that the social worker was cold. She should know that this is a parents worst nightmare and you have no idea what you guys need to do. Well just know I am thinking about you guys.

I want to leave you a comment that is strong and supportive but I really have no words, thank you for being willing to share such a hard experience with us. I love you and I think of you often.

I have to echo what Aubrei said, I can't believe all of this happened. I am so glad that your parents got there so quickly. Still thinking and praying for you everyday. Loves--

Chris and I are thinking about you two and praying that you are finding peace and comfort. Thanks for sharing little Freddie's story, he is darling and I'm so glad you two were able to spend time with him. You are so strong, I've always thought that about you, and I wish only the very best for you and your sweet hubby. If there is anything Chris and I can do, even though we're far, we would love to help.
xoxo